If the streetwear style is the knight of doomsday, then the techwear style is the warrior of the future. The techwear style is derived from the concept of near-future science fiction such as cyberpunk. In a nutshell, cyberpunk is an era of advanced technology, a chaotic society, and a bizarre city.
Closer to home, it is not difficult to find in many cyberpunk sci-fi movies, anime, and games. The characters in them are mostly dressed in simple black, white and gray with low-saturation colors clothing full of functional techwear designs. The purpose is to hide in the chaotic city while acting in a low-key manner without being exposed and responding in time when encountering emergencies.

Techwear clothing is mainly functional, so military uniforms and tooling elements often appear on the techwear clothing, such as zippers, buckles, straps, multi-pockets, etc., and combine ergonomics, technical fabrics, and avant-garde design on this basis. And then integrate these things to make it easy to put on and take off, function practical, adapt to the environment, prevent weather, and so on. Therefore, the threshold for entering the techwear clothing is naturally raised, which makes it even smaller than the streetwear style. Although mixing these may not be so in line with the public's aesthetics, or even a weird shape, this is the unique feature of techwear style.

As techwear clothing, advanced players can even modify their techwear clothing according to their needs and add some functional elements they like. It's not so much clothing as it is equipment. Techwear clothing can actually be said to be a kind of enjoyment when it is worn. The sliding sound of zippers, the collision of buckles, the friction of fabrics, etc., are full of ritual, security, satisfaction, and rhythm. This is the charm of techwear clothes.

Check out our top-selling techwear clothing selection for the very best in unique or custom, handmade pieces from our clothing shops. 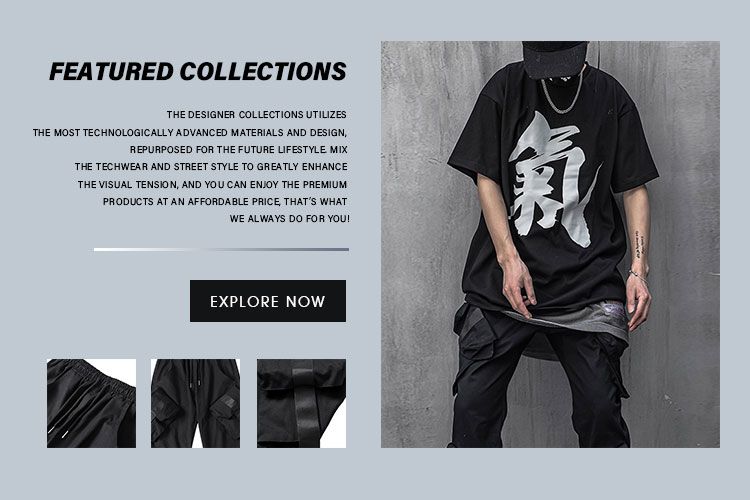 COVID-19 SITUATION
We do everything possible to make you receive your packages as soon as possible but for reasons beyond our control, the delivery time is extended because of COVID-19.
Thanks for subscribing